The World Council of Churches at 70 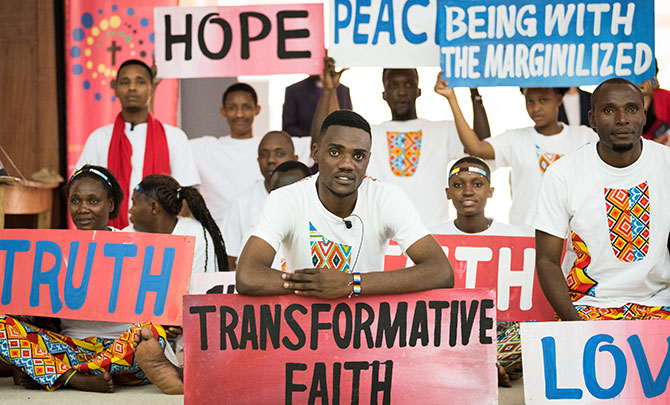 The World Council of Churches completed its first Assembly 70 years ago this month. Reform writers share their reflections

The World Council of Churches (WCC) is the most comprehensive ecumenical organisation in history. Its inaugural Assembly in Amsterdam, which sat from 22 August to 4 September 1948, brought together representatives from 147 Churches in 44 countries. This was the culmination of a movement that built up throughout the first half of the 20th century and had been delayed because of the Second World War. Today, the WCC has 350 member Churches from 110 countries, the majority in the global south, representing 500 million Christians.

Susan Durber
There is an impressive list of programmes that the World Council of Churches is famous for, including the its programme to combat racism and the ‘decade in solidarity with women’. There are documents, like Baptism, Eucharist and Ministry, or the Delhi Unity Statement, drafted by Lesslie Newbigin. But the most important thing that the WCC has done, or will do, is to call Christians together so that their unity in Christ becomes visible. The WCC is a fellowship of Churches ‘which confess the Lord Jesus Christ as God and Saviour according to the scriptures, and therefore seek to fulfil together their common calling to the glory of the one God, Father, Son and Holy Spirit’.

Michael Jagessar
The World Council of Churches’ 70th anniversary offers an opportunity to reflect on how we mark the past in the present when ecumenical memory seems to be at risk. My connections with the WCC have been through my research and personal encounters with its third General Secretary, Philip Potter, through teaching ecumenical theology for eight years in Birmingham and attending the
Assembly in Busan.

Local ecumenism can risk missing the massive amount of creative work done through the WCC’s
programmes. Examples include liturgical renewal, dialogues about faith and order conversations, interreligious conversations, creating space for newer and dynamic theological discourse, giving greater agency to voices and themes from every corner of the globe, and serving as a platform for global issues (the economic system, racism, sexism, integrity of creation, poverty etc). In this sense, the WCC has been at the cutting edge, a platform, a laboratory, a communion, and a movement towards renewal in the Churches…

Sarah Moore
I sometimes get asked: ‘So, what?’ What is the ‘point’ of the World Council of Churches? Is there any point in the United Reformed Church, and other small member churches, investing in it when
its business feels so very far away from many of the concerns and hopes of our local congregations?

I have represented the URC, and the interests of some of our ecumenical partners who do not have their own member, on the WCC’s Central Committee since 2013. Unsurprisingly, my answer to ‘Is there any point?’ is a resounding ‘Yes!’ Partly, precisely because we are small. The WCC is a forum
where the concerns of the URC can be put alongside those of other small churches. Together, our voice can be heard…

I am… on employment support allowance