A letter fromArchiveColumnists
No Comments 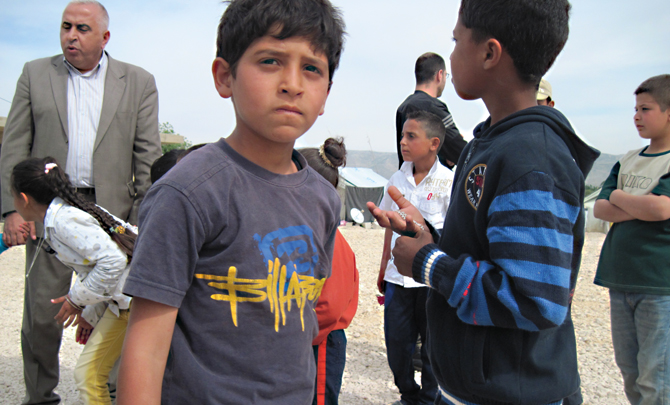 Life is really tough here. It’s hot, dirty, dusty and difficult. By the summer, we hope to be living in proper shelter and not tents.

The conditions in Za’atari refugee camp really are desperate. Besides the allergies, respiratory problems, disabilities, there is also a lack of electricity. Hygiene is a very big issue, for example the public bathrooms are dangerously dirty. We’ve tried to write public messages about personal hygiene but no one was really interested, even though the International Medical Corps tried to support this.

We’ve also tried several initiatives of our own, although it’s hard to make much impact. We’re really trying to reach the young people here with nothing to do and living an empty life. There are a few activity centres here setup by NGOs but they are limited and there is not enough. In a camp with 150,000 people, one or two centres make hardly any difference. And no one is really interested in getting involved unless they’re able to earn money. They need money to support themselves and their families.

That’s why what we want to tackle first is finding jobs for people to do here – to help themselves and the people left in Syria. We can also borrow ideas from other camps, like in Turkey where women produced and sold textiles.

We had the idea to set up a small group of people to solve community problems. We tried to stop attacks on UNHCR and police stations and tried to get people to see that they should help them instead. But we lack qualified people and it’s hard to keep a good team spirit going in a situation like this. With small numbers and limited reach, we lack ways to communicate and to deal with conflict in the community, provide awareness about services and tackle the very high level of frustration that everyone feels about the loss of their jobs and security.

We prepared information to tell the world about our suffering and to inform people in the camp about the true situation here. We showed the problems in all aspects of life – the difficulties with food distribution, how hard it is to cook, and the bathrooms that risk our health – to show what we need. Many local Jordanians and non-Jordanians have taken action to help us.

Despite the problems in the camp, we also want to show the positive aspects of the situation we are living in – the nature of people and many things they can do. We want to make a video of the work carried out by the NGOs in the camp making positive changes.

Ahmed, 23, is a Syrian refugee who has been living in Za’atari refugee camp in Jordan for three and a half months. He had just graduated from a social work degree course before fleeing to Jordan to escape the violence.

You can support his work by contributing to Y Care International’s emergency appeal for communities affected by violence in Syria. Donate online at www.ycareinternational.org, text SYRI01 with your donation amount to 70070, or call 020 7549 3175

This article was published in the June 2013 edition of  Reform.

On the pilgrim way: Yearning for normality