On the pilgrim way: “Beauty and goodness do not always go together” 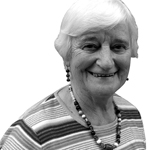 In October we spent two glorious weeks in the Swabian Alps in Germany; it is an area of steep, wooded valleys with castles atop the stony outcrops and picturesque villages. The autumn colours were breathtaking; it was idyllic. But beauty and goodness do not always go together.

One day we drove up to a castle called Grafeneck. Dukes had used it as a hunting residence, but in the 1920s it was taken over by a charity called the Samaritans (no relation to ours of the same name) which made it a home for adults with learning difficulties and behavioural problems – those with schizophrenia, autism etc. The centre was, I think, a good place in beautiful surroundings. However, in late 1939 the Nazi regime sent the SS to take it over; the party had other plans for the castle. During 1940, 10,654 adults and children were bussed up to Grafeneck and gassed in order to “purify the race” and remove financial burden from the state.

How can such evil ever be redeemed? Grafeneck today gives a two-fold answer: Firstly, by (eventually) facing the past. We visited the documentation centre there, opened in 2005; it gives a chilling account through copies of directives, building plans and careful lists of the many people brought there. The few photographs are not (with one exception) of the victims, but of the leading perpetrators and what happened to them. The exception is a photo of a handsome young man beside a copy of his father’s desperate letter asking how his schizophrenic son, who had been perfectly healthy when moved to his new “home”, could so suddenly have become ill and died.

We then walked along a lovely avenue to the place of remembrance: A big book with all the names that could be found, and further on, on a promontory, a large stone slab commemorating all the victims and ending with defiant words from Psalm 140: “I know that the Lord secures justice for the poor and upholds the cause of the needy.” I stood and wept. If my brother had lived with my Germany family, his name would have been in that book.

Secondly, by not letting evil have the last word. Grafeneck was returned to the Samaritans and it is now, once more, home to many adults who need special care. A cheerful man, who sat smoking on a bench, welcomed us with a big smile. A carer and a young woman in a wheelchair passed us happily chatting. The place of remembrance is in regular use with a vase of wild flowers on the stone altar. Informally, villages and towns had inscribed slates and sometimes laid flowers to remember their precious murdered ones.

This article was published in the December 2014/January 2015 edition of  Reform.

Editorial: Nice to be appreciated