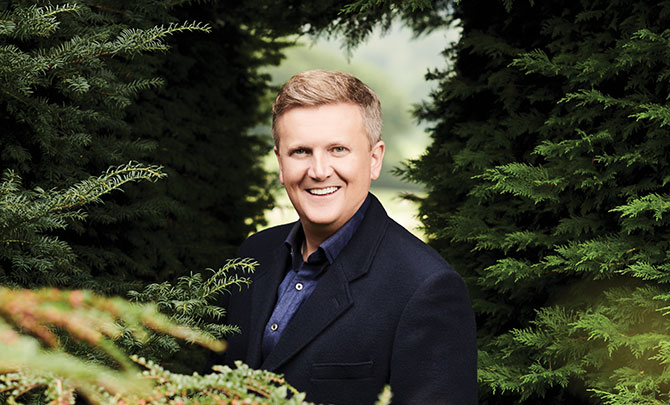 Aled Jones has been in the British public eye since the age of 14, when Toys R Us wanted to use ‘Walking in the Air’, a song from the Channel 4 adaptation of The Snowman, for a Christmas advert. The song had to be rerecorded and the original singer’s voice had broken, so Aled, lead soloist at Bangor Cathedral, got the job. It stayed in the UK charts for 15 weeks and gets played every Christmas.

Mr Jones has been a professional singer ever since. He has presented BBC One’s Songs of Praise for 16 years, and been on Classic FM for 18, as well as presenting numerous other TV and radio programmes. His latest record, Blessings, was released in November, with a companion book, Everyday Blessings: Inspirational words of comfort and hope, published by Hodder & Stoughton. He talked to Reform remotely in November.

How has this year been for you? As a musician who likes to perform in public and who makes a living out of it, has it been tough?
Yeah, it’s been horrible. And the worst thing about it is that even now we don’t know what the future holds, really. I have never, ever spent as long away from performing in front of an audience, so it’s unlike anything I’ve ever known. I said in an interview a couple of weeks ago that it was like a scene from Harry Potter, seeing all the live dates in my diary just disappearing in front of my eyes.

It has been tough, but I’m one of the fortunate ones, I suppose, because I’ve also been able to do radio and my television. Just singing, you know, I haven’t been able to do that. Though I’ve been very fortunate that I’ve been able to record an album, and so I have been singing, just not for an audience. And also it’s very lucky that my tour wasn’t actually cancelled, at least it was just moved to next year. So it’s with hope that I look forward to April, May and June next year. But I’m not wanting to count my blessings just yet.

Have you seen this government advert suggesting that your next job is in cyber, you just don’t know it yet? Have you started retraining?
No, I haven’t. I did see it, yeah. It was very timely, wasn’t it? I don’t know what I would retrain as. I’m quite happy doing what I’m doing, I’ve been doing it since I was 11. So I think it’s a bit too late now really. I’ll have to just carry on doing what I’m doing.

Do you think the music industry needs more support than it’s getting from the government?
Yeah, 100%. Of course it does. If you follow social media, you’ll realise that there is a lot of animosity there. There’s a lot of worry. And I’m not just talking about concert halls and orchestras and classical music, I’m talking about theatre too. You know, a lot of my friends in musical theatre don’t know when they’ll be back treading the boards again. And it’s something that they’ve trained all their lives to do…