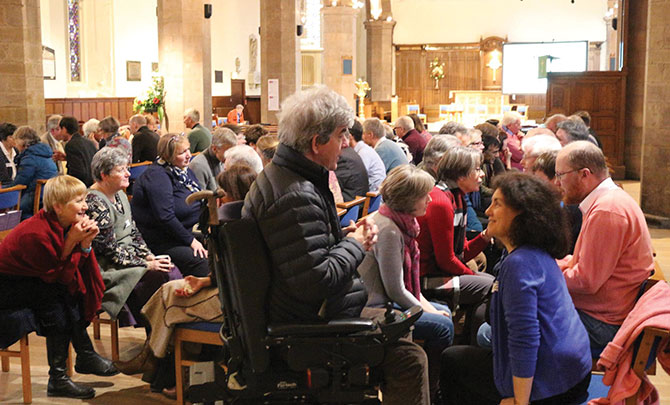 When commerce, culture, compassion and congregational life work together, they enrich a church’s mission. That, says Samuel Wells, is the combination behind the HeartEdge movement

In many ways, St Martin-in-the-Fields would like to be a ‘normal’ church, focused on congregational life, the cycle of the Church year and being a good neighbour. But its location and history mean that it is far from being a normal church. The movement that was created to turn the blessings of St Martin’s into blessings for church and society more broadly is called HeartEdge.

HeartEdge seeks the renewal of the Church by catalysing kingdom communities. The movement was launched from St Martin’s in February 2017, because significant numbers were coming here to learn about the features of our life which they could adapt and replicate in their own contexts. This national movement now has ecumenical and international dimensions. It aims to foster, not to impose; it sees the kingdom as God’s gift to renew the Church, rather than as a mission field to be conformed to the Church’s image, and it sees churches as lively and dynamic communities, rather than defensive and narrow congregations. Through HeartEdge, communities mentor one another, offer consultancy days to one another and meet in larger gatherings to exchange ideas, encouragement and challenge. It seeks not to create clones of St Martin’s but to become the international embodiment of those committed to the vision of being ‘At the heart. On the edge.’

Just as St Martin’s aspires to be a community of hope, reimagining church and society through commerce, culture, compassion and congregational life, so HeartEdge cultivates an understanding of mission based around these four Cs. What is unique about St Martin’s is not that it is engaged in these things – many churches are, to different degrees – but that it is hugely invested in all four at the same time. HeartEdge rests on the conviction that the interplay of two, or preferably three or four of these can profoundly enrich a church and can cross fertilise one another to great effect. The movement is largely about encouraging and enabling churches to see such interplays begin, flourish and grow. This is what it means by describing itself as an international movement of kingdom churches, churches that believe the Holy Spirit is moving beyond the conventional notion of church. We believe in modelling the life of heaven by being open to partnership with what the Spirit is doing in the world…

Samuel Wells is Vicar of St Martin-in-the-Fields, London, and the author of A Future that’s Bigger than the Past: Towards the renewal of the Church (Canterbury Press Norwich, 2019), a theology of the HeartEdge movement. Click here for more information about HeartEdge

A good question: What role should children play in church?