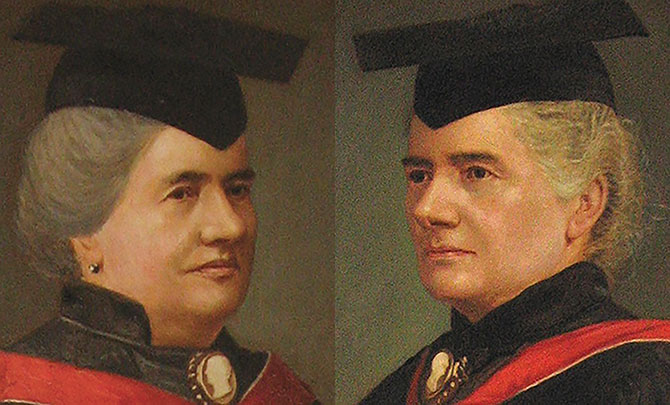 A blue plaque has been unveiled in Cambridge to two remarkable sisters. Nick Lomax tells the story

Westminster College, Cambridge, has recently celebrated the vision and generosity of twin sisters who were its benefactors, with the dedication of a Cambridge blue plaque. A formal unveiling of the plaque was carried out at the college’s Alumni and Friends Day on 1 June, in memory of Agnes Smith Lewis (1843-1926; pictured left) and Margaret Dunlop Gibson (1843-1920; right). Not only did the sisters donate the site on which the College is located, they were also biblical scholars, linguists, and intrepid explorers.

The ceremony was carried out by Professor Janet Soskice, Professor of Philosophical Theology for the Faculty of Divinity at Cambridge University and an Emeritus Fellow of Jesus College. The blue plaque, awarded by Cambridge City Council, is only the seventh to be given to women. The occasion also marked the launch of a new Association of Alumni and Friends of the College, and was attended by more than 160 former students and friends.

The twin sisters, Agnes and Margaret, were brought up as Presbyterians in Irvine, Ayrshire, inherited a fortune, and taught themselves 12 languages. They travelled widely across Europe and the Middle East at a time when such journeys by Victorian women were unheard of, making some remarkable discoveries along the way which have had profound significance for biblical scholarship. They were both awarded honorary doctorates by the major Universities of Scotland, Germany and Ireland for their work on ancient manuscripts. …

A letter from… a Ugandan refugee camp