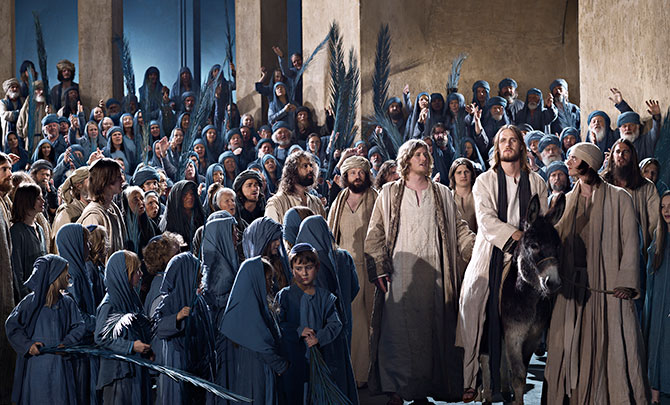 What started as a bargain with God has become a centuries-old village tradition that brings audiences of hundreds of thousands from across the world. In 1633, Bavaria suffered an outbreak of plague so bad that the villagers of Oberammergau tried to win God’s mercy by vowing to stage a regular re-enactment of Christ’s passion. The plague subsided and the first passion play was staged at Pentecost 1634, over the graves of the victims.

The plays took place every ten years until 1674, then the pattern shifted in 1680. Extra performances have been staged to mark anniversaries, while others have been cancelled because of difficulties such as war and attempts by the Catholic Church to ban the play. In 1780, the play was purged of graphic violence; in 1990 it was purged of antisemitism after decades of Jewish protests and a withdrawal of the Vatican’s endorsement. A number of auditoriums have been built for the play, the present one designed for an audience of 5,200, with an open-air stage.

Oberammergau’s passion play is an epic phenomenon – five hours long plus a three-hour break, the first half in daylight and the second (a controversial innovation last time round) by night. The story starts at Jesus’ entry to Jerusalem with a crowd scene of 2,000, and is interspersed with tableaux from the Old Testament. There are 124 speaking roles, a 65-piece orchestra and a chorus of 48. At one time, only Catholics were allowed to take part, but participation was extended to all Christians and since 2000 includes Muslims too. Male actors are required to grow out their hair and beards. In 1922 the town rejected an offer from Hollywood of 14bn Deutschmarks to film the play…

A good question: What makes a good hymn?