Jumble sales of the apocalypse: Typing in tongues 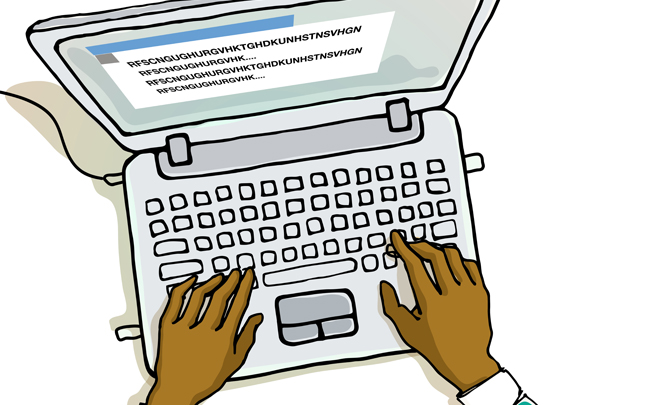 Having a spare moment in the passenger seat of a car recently, I got ordained on my iPhone. Thanks to the Universal Life Church (motto: “We are all children of the same universe”) you can become an ordained minister in about 30 seconds.

On completing the online form, I was whisked to a page where I could buy a personalised ordination certificate for $8.99. Now, I can start my own church, conduct weddings, go on sabbaticals and open garden fetes. This online service has proved so popular that the Universal Life Church is producing an estimated 60 Revs per hour, boom boom.

The internet has been a bit of an Alton Towers ride for Christianity since the heady days of the 1990s. Twenty years ago, most Christians, if they had heard of the internet at all, saw it as the tool of the antichrist, which would subjugate the whole world to the implacable will of Satan. Ten years later, the internet was item nine (b) on the agenda of the church meeting: “Progress on the church website: Any news?” And today, a million dreadful ecclesiastical websites later, churches are now tweeting the sermon, selling off the hymn books on eBay, jealously counting their likes on Facebook and posting pics on Instagram of how an incontinent donkey wrecked the Nativity play.

Along the way, there have been some inspiring moments which only religion could have brought to the internet, such as webcam baptisms, for people who want to get baptised, don̕t have a nearby Baptist minister to carry it out, but do have an internet connection and a bathful of water ready to go. Or after-rapture pet care, whereby you can make sure your beloved dog, cat or budgie is adopted after you zoom through the clouds to meet the Lord. The service is offered by atheists, who are guaranteed to still be available for pet care duties after the second coming.

One recent development has continued this fine tradition of theology meets technology, and it concerns the revelation of a new spiritual gift. It all came about with the sudden death of Pastor Zachery Tims – pastor of the 7,000-member New Destiny megachurch in Florida. Pastor Tims was in a New York hotel room when he abruptly died in a non-traditional fashion for a pastor – by overdosing on cocaine and heroin. This left the pulpit of the New Destiny megachurch unexpectedly vacant, which is where Dr Juanita Bynum steps in. Dr Bynum is a televangelist, author, gospel singer and prophet. (Some say she spent as much time and academic effort gaining her doctorate as I did on my online ordination, but that’s neither here nor there.)

Hearing of Pastor Tims’ death, Bynum took to Facebook and started posting prayers. She prayed not about foolish Pastor Tims, nor about the congregation he duped and scandalised, but about the plum vacancy at New Destiny megachurch, which commands a salary easily able to support a lifestyle of Manhattan hotels and crack cocaine.

Juanita prayed: “YOU ARE THE ROCK AND THE SHIELD AND THE ANCHOR. WARD OFF ALL THE VULCHERS WHO WILL COME FOR GREEDY GAIN AND NOT BE CONCERNED ABOUT THE PEOPLE WHO ARE HURTING IN THAT CHURCH.” But then, thrillingly, Juanita broke into an outburst of typing in tongues: “WE CALL ON YOU JESUS. ’YOU ARE OUR HELP AND OUR HOPE!!! UBGUGTRUCGNRTUGTIGRTIGRGBNRDRGNGGJNRIC YOU ARE OUR HELP AND OUR HOPE. RFSCNGUGHURGVHKTGHDKUNHSTNSVHGN OUR HOPE IS IN YOU FATHER.” Within hours, 2,000 people had liked her prayers.

I have to confess that speaking in tongues has never really been my kind of thing. Even as a young Christian, I couldn’t help but notice that a lot of the tongues I heard sounded like a roll-call of Japanese car manufacturers: ’Kawasaki mitsubishi suzuki mazda yamaha, amen’. I even tried to get things going by repeating, ’She come on a Honda’ over and over again until the Holy Ghost kicked in, but somehow, the engine would never start. Which is my loss, I’m sure.

It looks like Juanita went a bit too far in trying to bring the gift of tongues to the keyboard-based world of the Internet. Even Christian critics said that maybe she fell asleep and slumped on the keyboard, or that a cat sat on it to attend to some personal hygiene. One unbeliever commented: ’She actually typed it with her tongue’. Clearly, the Holy Ghost is not as easy as ABC. Or even QWERTY. That’s a shame, because as a newly minted Internet Rev, typing in tongues could have become a key part of my ministry. Which would have been very jyfutdtrxjhljbkhvkhv, I’m sure.

This is an extract from the September 2015 edition of Reform.