May 2015Reviews
No Comments

Together for the Common Good: Towards a  national conversation
Edited by Nicholas Sagovsky and Peter McGrail
SCM Press
£25

The “common good” is perhaps the holy grail of political and social policy. The latest quest, building on the legacy of Derek Worlock and David Sheppard, is a movement that combines contrasting visions and methods to bestride older divisions and move us “towards a national conversation”. Running through this book of 13 essays is the assertion in the Catholic catechism: “A society that wishes and intends to remain at the service of the human being at every level is a society that has the common good – the good of all people and of the whole person – as its primary goal.”

Anna Rowlands – a theology lecturer at King’s College, London – and Andrew Bradstock – the United Reformed Church secretary for church and society – kick off: Which takes precedence, individual or community? The main section, “Traditions of the common good,” has two central contrasting essays: the “god-less” Jon Wilson writes: “The danger is that the common good becomes just another set of prescriptions with no relationship to real action … my anxiety is that a theological orientation might assist in that evasion”; the evangelical Jonathan Chaplin is keen to uphold a more confrontational (Protestant) tradition which may “produce intellectual and spiritual splintering rather than a tendency to convergence”. Despite these criticisms, there are substantial essays from historians and activists in support of the undertaking: Patrick Riordan reclaims the insights of Aristotle concerning a good society; Esther Reed revisits the radical teaching of Jesus; Samuel Burgess commends the subtle conservatism of Edmund Burke on nation-building; Tehmina Kazi contributes a Muslim perspective on shared human values and perceptive comments on her vulnerable faith tradition; Malcolm Brown surveys the mood swings on these matters within the Church of England.

Finally come three eminent economists on “Markets and the common good”. Brian Griffiths, while defending the free market traditions of Adam Smith and Friedrich Hayek, concludes: “When a market economy becomes a market state it can undermine the common good,” a sentiment from which Philip Booth and Maurice Glasman would not dissent even though they approach the theme from different positions. As Clifford Longley says in his concluding essay: “All economic choices … have a moral dimension, often far greater than an individual may have bargained for,” (presumably no pun intended?)

No conclusions, but a stimulating start to a national conversation that needs to be had – and is sadly not taking place during this election campaign.

This short book is a tool for reflection and discussion, prompting the reader to move away from a search for certainty to a place of mystery, and acknowledge how little we truly know. We are invited to embrace the state of unknowing.

Kavanagh leads us on a journey. She invites us to recognise how our cultural context can induce in us a belief that facts and certainty are crucial in life and in faith. She then considers how we can inhabit a state of being that isn’t dependent on cerebral understanding, and points us to the creativity that can be released by embracing the gifts of uncertainty. Finally, she reminds us how such practice has historically always been a part of Christian experience and can bring us closer to God.

This book enters complex and well-documented territory; it is comprehensive in its historical and theological references, but at times I found its brevity a little frustrating. My engagement with the book coincided with the start of Lent, and I found it worked well as a tool for daily reflection; although, I did wonder how helpful it would be for someone engaging with the subject for the first time. Having said that, there is a comprehensive list of resources and references, so this book could open the door to further exploration. It would also provide interesting material for small groups who are able to be honest with each about the way they experience – or don’t experience – God.

A call to political action 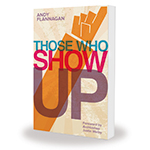 Those Who Show Up
Andy Flannagan
Muddy Pearl
£9.99

Politics, and particularly party politics, has an image problem. Many people are turned off by politics; they don’t bother voting. The MPs’ expenses scandal was a watershed moment, and social media now highlights any scandal or misdemeanor. But we also know many local councillors and MPs who are fully committed to trying to make a difference to their local community and the country. Real change, tackling the injustices in our society, can be achieved through engaging local people and the churches in their local neighbourhoods. Politics is key in this process. Locally, councils and councillors hold the purse strings to the town hall; nationally, the government, through major funding streams and changes in legislation, can bring radical change to headline issues such as: Employment, education, poverty, health and crime.

Flannagan backs up his argument with some excellent theology and useful biblical references about engagement in politics – good sermon material! As he says himself, the book “isn’t trying to get you to vote. It’s going to suggest that it could be your name on the ballot paper. Or, that you could be helping someone whose name is.”

Flannagan’s book is thought-provoking, engaging and stimulating. The chapter entitled “But it’s not really a priority for Christians is it?” begins with a quote from Senator Roy Herron: “In a democracy, people get the government we deserve … it is our duty, both as citizens and as Christians to make it better. The question, then, is not, how can a Christian be in politics? The question is how can a Christian not be in politics?” The Archbishop of Canterbury says in his foreword that the book is “challenging and encouraging in equal measure”.

How to hear God 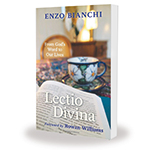 It is ironic that we now look to Catholic theologians like Enzo Bianchi to teach us how to hear God speak as we read the Bible. But teach us they must, for, in recent times, a barrier has arisen between the message of the Scriptures and the world of religious ideas many of us presently inhabit – a barrier of strangeness that alienates us from the ancient text. And so it is in his book, Lectio Divina, that Bianchi seeks to show us how we might again hear the Word of God in the reading of the Scriptures.

Although the term lectio divina refers to a form of biblical reading originally used in medieval monastic life, it is a practice not dissimilar to what took place in the family prayers of many a devout Puritan home, or in the private daily devotion that used to mark much evangelical spirituality. With remarkable candour, Bianchi admits that Scripture went through a sort of quarantine among Catholics for 1,000 years, but, buoyed by the Second Vatican Council’s Dei Verbum, he outlines what we now seem to lack – a theology of Scripture that allows us to read the Bible spiritually and with integrity.

Bianchi is indirectly influenced by Karl Barth’s doctrine of the Word of God. But for him, the divine Word takes the form of the incarnate Christ, the Scriptures and the Eucharist. Through the action of the Spirit, the reader who is willing to read, meditate, pray and reflect upon the biblical text is confronted directly with the living Word of God, that is, the person of Jesus Christ.

The book is both subtle and complex because the issues are deep and involved. Bianchi wishes to give full weight to the disciplines of literary and historical criticism and all that can be learnt from the history of interpretation. He is neither a literalist nor a fundamentalist; he certainly does not want us to throw our minds in the bin; but he is insistent that the Scriptures are Spirit-breathed and are to be read spiritually. The life of the Church depends on it.

I had to read his book carefully and thoughtfully. Here and there I had to make allowances for someone who was writing from a tradition quite different from my own. But throughout it I discerned a deep love and enthusiasm for the Scriptures not dissimilar to that which motivated the work of John Wycliffe and William Tyndale.

Alan Spence is a church minister serving in the Thanet  and Sandwich Cluster, Kent

This article was published in the May 2015 edition of Reform.

A letter from… Egypt