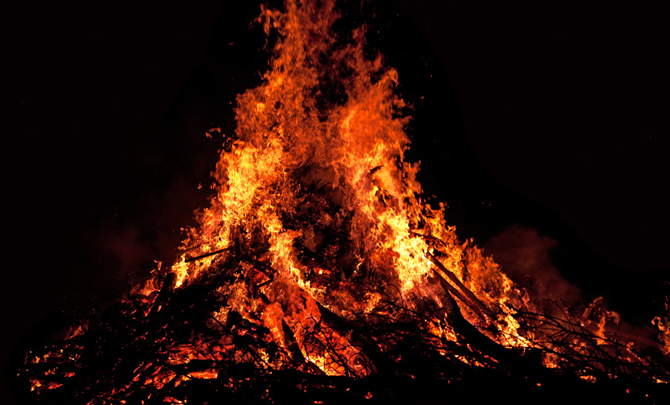 Some months mean more to me than others. April, for example, is just a bunch of days; but the very word “November” takes me instantly back to childhood. Walking down misty streets through fallen leaves. The evening already dark straight after school. And the massive discomfort of standing next to a sun-hot bonfire in the icy night, too hot and too cold at the same time, with my tongue feeling fuzzy after I burnt it on a jacket potato.

The ultimate cause of my discomfort was Guy Fawkes. (Well, not ultimate. That goes a bit further back.) If he hadn’t done his gunpowder thing, we wouldn’t have been burning him in effigy 300 years later, and I wouldn’t have burnt my tongue.

He still causes me discomfort. I’ve long thought it’s a strange and unpleasant thing that one of Britain’s main annual festivals is a Catholic-burning party for all the family, as if religious victimisation has become so habitual we don’t even notice it. Or is it something else? Is it that time has the healing power to turn even such hateful practices into harmless children’s entertainment? (Harmless apart from the potatoes.)

As with every question of religious violence, there are two sides – at least. This month’s Reform is the “persecution” issue. The theme wasn’t really deliberate. We chose it for “A good question” as it’s been in the news. There’s also “A letter from” a woman who fled Pakistan to escape violence. But look what else we have: Solidarity with Christians murdered in Peshawar; a Catholic Christ buried to avoid Protestant attack; Puritan ears cropped; anti-Methodist theatre; Mormon women excluded; churchgoers threatened with hell; cross-wearing restricted; hymn-singing Chartists crushed, and peace campaigners arrested.

You’ll find some of my own opinions on the subject inside. I had wanted instead to hear from a non-Christian faith on the subject of UK persecution, but still, I hope, as ever, that we have provided a forum for different perspectives on a many-sided question, and that it provides some food for thought.

This article was published in the November 2013 edition of  Reform.

A good question: Are Christians persecuted in Britain?