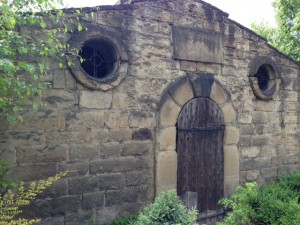 I came across this odd little building in Alfreton in Derbyshire on Saturday. It doesn’t look so odd in the photo, partly because it could be in the middle of nowhere (or the 18th century) but in fact it’s on the main road through town, with modern houses all around. Also you can’t read the name in the photo, but it’s called The House of Confinement.

Presumably it doesn’t see a lot of action these days, but is kept by the town as a memento to the confinements it achieved in the past.

Or so I thought, until I passed it again on Sunday morning, and saw these people outside.

Clearly the constable was there with the family to release their errant offspring to them after his Saturday night misdemeanours. Nice to see local traditions being kept alive.